Art in Another Language - Farhad Ahrarnia 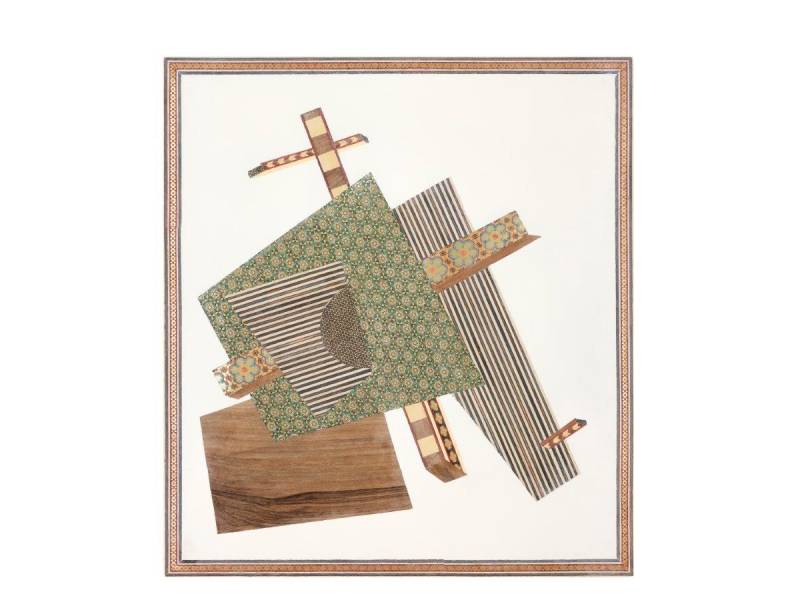 For his first solo exhibition in Beirut, the British-Iranian artist Farhad Ahrarnia is presenting four bodies of work in collaboration with craft makers, from silversmiths to inlaid mosaic makers (Khatamkar) and embroiderers.

Ahrarnia translates historical events, images, monuments and ideas into a visual language, beautifully expressing the complexities of intercultural dialogue and of the writing and interpretation of history.

In his series, A Woman In Arabia, Ahrarnia uses embroidery to embellish and cross-stitch photographs taken by Gertrude Bell (1868 –1926). An English archaeologist, political officer and writer, Bell explored, mapped and influenced British imperial policy-making in the Middle East during the early 20th century. Ahrarnia traces and highlights her role as a colonial surveyor who used rulers and pencils to cut the Middle East, stitching her photographs with needles and leaving ‘loose threads’ to hint at other readings of history.

In his Khatam series, Ahrarnia borrows from and draws on the visual language of early to mid 20th century Modernism, mainly Russian constructivists, to dissect and re-articulate the inherently modern qualities of traditional Iranian khatam-making and its infinite expressions. A dynamic and mathematically constructed technique of inlaid micro-mosaics using bones, coloured woods and various metals, Khatam is rooted in the aesthetic, spiritual and historical characteristics of Shiraz - Ahrarnia’s hometown.

The Dig series features silver-plated bronze shovels, engraved with well-known motifs from ancient history. For this exhibition, Ahrarnia, who has visited Lebanon on several occasions, has chosen antique figures from the National Museum of Beirut. The reliefs on the silver shovels highlight the importance of Lebanese ancient history, from Sidon to Baalbeck.

Similarly, like the needles on his embroidered panels, the shovels’ pointed tips encourage viewers to dig into their own past in order to discover the many layers of history.

Changing the language of war into peace, embroidering flower and leaf motives on varied camouflage fabrics, the fourth body of Ahrarnia’s work, After Matisse, is heavily inspired by Matisse’s cut-outs. Bedridden during the Second World War, and in the final years of his career, Matisse’s ‘drawing with scissors’ works are iconic. But Ahrarnia enjoys the interplay: while Matisse ‘carved into colour’ with his cut-outs, the artist here makes reliefs by embossing the patterned military fabric with boldly coloured embroidery - reversing technique and background. Yet with almost the same aim as Matisse: transforming an era of war into a moment of peace and pleasure, and engaging simplicity with creative sophistication.