Once Upon a Time... A Revolution كان يما كان ثورة - Selim Mawad 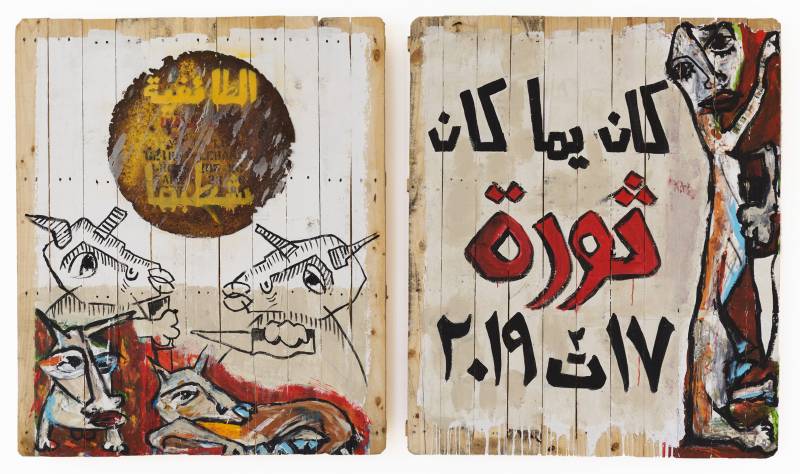 As a continuation of our two collective exhibitions emerging from the October 17 movement, and after three months of confinement, we are thrilled to invite you to discover Selim Mawad’s work in his first solo exhibition at Galerie Janine Rubeiz.
An artist and a human rights activist who has been committed to conflict transformation and peace building for decades, Mawad has given the revolts at Riad el Solh Square a meticulously crafted background with his Minotaurs and Antelopes since October 17, 2019.
"Once Upon a Time... A Revolution" offers to take you on a journey through his conception of revolutions, how and why they begin, and how he perceives their culmination - or demise.

Once Upon a Time... A Revolution
كان يما كان ثورة

- I gave them the wall. They can break their heels and their heads against it. You mock them.
- I give them space for collective therapy.

The bull and the antelope in dialogue
Day 21 of Revolution

Half-man, half-bull, Mawad’s Minotaur is implicated in the social dynamic which leads to universal revolt, as a representation of the collective self. Mawad’s art is a symptom of his activism, a mere manifestation of his unwavering bid for the universal values he has upheld for over two decades.

His Bull rises in Africa and resigns in Beirut. The exhibition treads the metamorphosis of the bull, and in effect becomes a eulogy for many failed revolutions, yet a celebration of the process and the will to revolt. As Lebanon’s revolution comes to its demise, the bull recedes, the human surfaces, slaughtering the calf as a revolution must slaughter the very social norms it is seated in - a crime seen in the bird’s eye view! And the antelope emerges.

Whilst the Thawr –الثور is sacred for some, and Revolt – Intifada is revolution for many, the Thawrat – الثورة is the primordial self of one and of all.