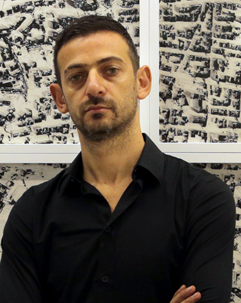 Using the physical body, subject to the natural process of decay, as a metaphor for the body politic, belongs to an order of representation where disembodiment and displacement have become, not circumstances, but structural conditions that determine the birth of a new political self.
Ali Cherri's work, initially concerned with the effects of war on the body, later expanding onto eschatological views of history and the fusion with the historical and the personal, mediated by gender and sexuality, takes always on different contextual approaches to unmake the present into cinematic and theatrical sequences.
In this body of work, images and experiences appear streamlined, inscribed on maps, political sub-texts and grand narratives replete with irony.
An alternative history for modernity is proposed, whose final destination remains uncertain.
In this unstable territory, discursive possibilities create and annul each other, foaming into the surface of the body politics as both paradox and anomaly. The process of self-consumption is nearly complete but the resources of visual language are infinite; the energy is never depleted.

Ali Cherri was born in Beirut in 1976. He is a graduate in graphic design from the American University of Beirut and holds a master's degree in performing arts from DasArts (Amsterdam). As a visual artist working across video, installation, performance, multimedia and print. His work has been showcased different solo and group exhibitions such as “Bad Bad Images” (2011) and "On Things That Move" (2014) at Galerie Imane Fares (Paris),, “Dégagements” at the Institut du Monde Arabe (Paris, 2012), “Southern Panorama” at Video Brasil (Sao Paolo, 2011), “Beirut” Kunsthalle (Vienna, 2011), "HomeWorks6 at Ashkal Alwan (Beirut, 2013) and with Galerie Janine Rubeiz, the duo exhibition "Some Body To Love" with Shirin Abu Shaqra (Beirut, 2013).
Cherri's work has been presented at various venues including Centre Georges Pompidou (Paris), Delfina Foundation (London),  Modern Art Oxford (Oxford), Tate Modern (London),  and his films have been shown at Berlinale (Berlin), TIFF (Toronto), and KunstFilm Biennale (Cologne), among others.
Recently, he was awarded a Res Artis Award 2013 at Video Brasil and the award for Arab Short Film Best Director at DIFF (Dubai) in 2013.