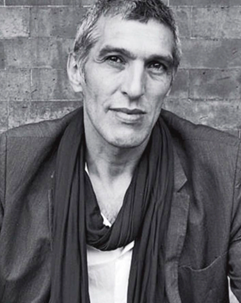 One of the leading contemporary artists from Iran, Hassanzadeh has devoted a large part of his work to exploring the Western gaze on the world of Islam, through recreating  a possibility of self-representation anchored not only in a critical re-evaluation of this gaze but also in popular images and a pictorial tradition inherited from the era of revolutions.
Perceptions of the Middle East and Iran as a part of the Islamic world are broken not through deconstruction or pop art, but reclaiming a change of orientation in the gaze, denouncing the Western obsession with certain iconographies.
Engaging with the radical failure of the contemporary imagination to depict 'otherness' without ethnic marketing, Hassanzadeh is political only insofar as his subjects are sensitive for all audiences, but the almost abbreviated language, always concise, stresses personal experience, familiarity and the everyday.
At the threshold of pop art, almost whimsically, he remains altogether pictorial and formal.

Khosorow Hassan Zadeh was born in 1963 in Tehran, Iran. He attended the faculty of painting at Majtama’e Honar University, and the faculty of Persian literature at Azad University, both in Tehran. He has held solo and group exhibitions since 1990's, in London, Paris, Abu Dhabi and Beirut.
At Galerie Janine Rubeiz, the artist held the exhibition “Ya Ali madad” in 2010.
His work has been acquired by The World Bank in Washington DC and The British Museum. Previously, the artist's work and has been auctioned by Sotheby’s and Christie’s and is on permanent display at Galerie Janine Rubeiz.