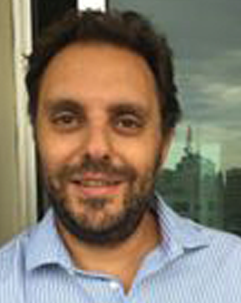 Paul’s work is full of emotions with a clear touch of sarcasm, covering various subjects such as couples, love, family, and more recently a series on his city Beirut, as he sees it. His recent artworks, started in 2013, have the ambition to beautify certain aspects of Beirut he hates the most: garbage (that he painted well before the garbage crisis of 2015), traffic jams and concrete invasion. He also intends to glorify dying small commerce and craftsmanship that are slowly disappearing from the streets of Beirut, like the traditional grocers, the green grocer, the shoemaker…

The common thread across all his work is his “naïve” way of using the full color palette, turning his paintings into bright, joyful and dynamic art pieces. The artist focusses on the harmony of colors in the entirety of the painting. The happiness that outbursts from the canvas is quickly contagious, often triggering a smile…

He uses major mediums in his work, like oil paint, sanguine, ink, charcoal or acrylic paint, on canvas and paper.

Born in Beirut in 1975, Paul is a self-taught painter who grew up surrounded by a family of artists and musicians. Paul did his first oil painting at the age of 7. He lived all his childhood in Beirut, during the civil war where he used to spend hours drawing and painting his surroundings. He did many comic strips depicting his family, his friends and the war. He also developed his drawing and painting skills, by reproducing masterpieces of John Constable, Picasso and Lebanese painters.

As he grew up, Paul Kupelian continued to express his “up and down moments” through his art that he used as a therapeutic way to express his feelings and emotions. Most of his work results from major events in his life.

"Looking at the Bright Side" - Paul Kupelian 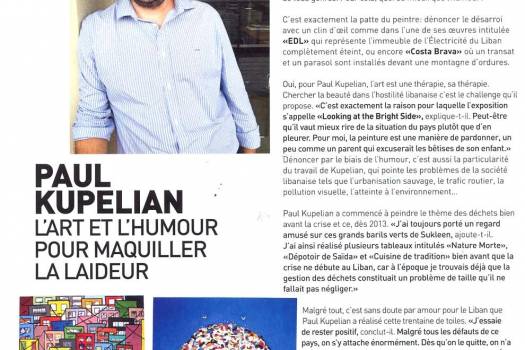