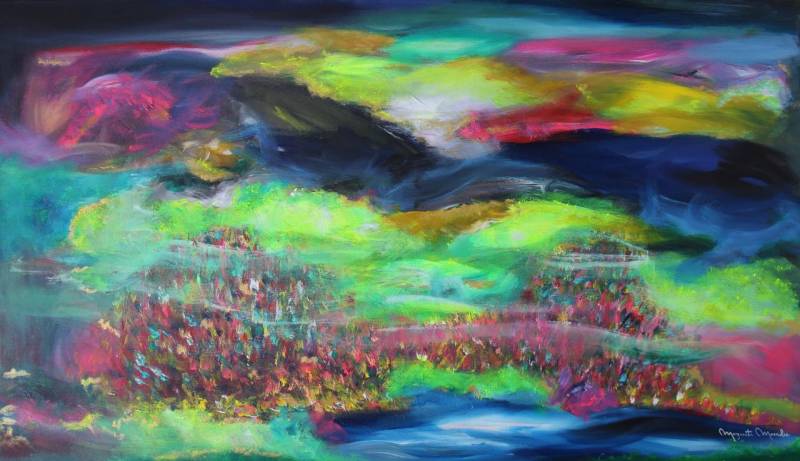 Mr. Jose Ignacio Madrazo, Ambassador of Mexico, and Mrs. Nadine Majdalani Begdache, Galerie Janine Rubeiz, have the pleasure to invite you to “Fuerza del Color (The Strength of Color)”, a solo exhibition by Margarita Morales.

“I like to represent, above all, the energy of positive experiences, the essence of nature and everything that surrounds us; use colors on the canvas to transmit light, aroma, substance to the viewer; provoke a unique reality, distilling the magic of a world’s story in which one would like to dream”. - Margarita Morales

The exhibition is on show from September 7 until September 28, 2022, at Galerie Janine Rubeiz.

Margarita Morales was born in Ciudad Mante, Tamaulipas Sate, Mexico. She obtained a degree in Visual Communication at the Autonomous Metropolitan University, and carried out additional studies at the renowned Academy of San Carlos, both in Mexico City, before undertaking a three-year artistic residency in London, United Kingdom. She currently lives in Berlin, Germany.

The artist’s work has been shown in several museums and international institutions, in both individual and group exhibitions. Among the most recent are those carried out at the Deutsche Bank Kunsthalle Berlin, in Germany (2013); the National Museum of Art of Azerbaijan in Baku (2015); the Stock Exchange (2010) and Grupo Milenio (2017), both in Mexico City; the Picture Gallery of the State of Tamaulipas (2021) and the Metropolitan Cultural Space (METRO, 2008), both in Tampico; the Museum of Modern Art in Toluca in the State of Mexico (2017); the Tijuana Cultural Center (CECUT) in Baja California (2017); the Sinaloa Art Museum  (MASIN), in Culiacan (2018, 2019); the Nairobi National Museum, in Kenya (2019); and currently at Galerie Janine Rubeiz, in Beirut, Lebanon.

Margarita Morales’ abstract painting is characterized by her commitment to representing feelings through an independent visual language endowed with its own meanings that create impressions, improvisations, and compositions as a result of the perception of nature, of the intangible. The creative process is a dialogue –usually sudden and emotional- with color.

Her work highlights the essence of nature and of life itself, with their congruence and contradiction. The diversity and the wide range of alternatives they offer are also represented, being the ecstasy of joy, the guiding thread in each of her works.  This allows Morales to create endless narratives from different shades and nuances.

Many of Margarita Morales’ works are part of private and corporate collections in Mexico and abroad.