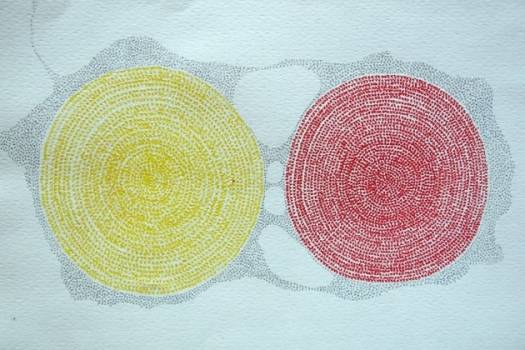 BEIRUT: When it comes to drawing, detail is crucial. Usually, every mark on paper is accounted for and calculated to take some sort of form by the end of the process. Other times, the act of drawing can seem a sort of meditative and escapist means to a different end, an end that isn’t apparent from the work itself.

“The Dopamine Series: Escape Through Mind Exploration,” the latest solo show of Adlita Stephan presents a series of elaborate mixed-media drawings, all created between 2013 and 2015.

“This series is the means to lose the consciousness of existence,” Stephan says in her artist statement. “To plunge into my mind and detach myself from surroundings. From reality ... Inner submersion I would call it ... There is nothing else behind it, as simple as it seems.”

After spending some time with Stephan’s varied selection of work, it is apparent that unexpected nuances can be found in all of them.

Take the untitled looping spiral that can be found near the entrance of the space. The elaborate nature of the piece is evident even from a distance. Upon closer inspection, the ink spiral reveals itself to be comprised of miniscule writing in Arabic. Wrapped about itself over the work’s 150x150cm surface, the sentence “Death is unavoidable” evokes an unexpectedly eerie feeling.

Some of the works exude a meditative quality.

A swarm of squiggly black lines covers most of the surface. Like ants at a picnic, the squiggles form a formidable black mass that all but consumes the top half of the medium. They are discontinued, then, as if halted by white circle that shines through the center.

The lower half of the piece is relatively muted by comparison. An unembellished gray line streams across the paper, like a sort of barrier, as tiny lines stack up in rows below it.

Elsewhere, a collection of loosely drawn swirls, the sort of thing an infant might scribble, are intertwined with piles of dashed lines.

Trying to read the text is utterly frustrating.

Elsewhere in the show, a series of 18 colorful mixed media-on-paper drawings offer a welcome departure from the relatively monochromatic palette of the rest of the show.

They resemble topographical maps, whose landscape contours are represented by dots, lines, numbers and letters.

In one drawing, a collection of suspended green dots appears to drizzle to the bottom of the medium like grains of sand. In another, a wave of red cross-hatched dots undulates across half of the paper.

Like a sort of bewildering looping dream, the meticulously drawn works of Adlita Stephan’s Dopamine Series confront the viewer with a world of complexity and repetitiveness that, if not addictive exactly, may leave you feeling contemplative.

Adlita Stephan’s “The Dopamine Series: Escape through Mind Exploration” is on view at Galerie Janine Rubeiz until July 28. For more information please contact 01-868-290.