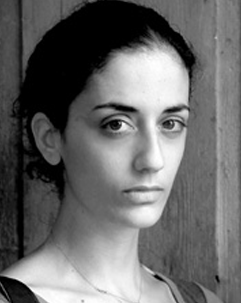 What lies after or under the image is a question of the moment. As photography's evolution no longer sees the medium as self-evident and begins to question its own 'history', the photographer abstracts himself from the old representational canon and searches for a language of autonomy which is able to see in that after and under.
Rima Maroun's photography is intent to evoke a physical experience, to consolidate motion and rupture, to ground the subject within a plethora of possibilities, potential and real, that are triggered by and in our relationship to images.
Locating an emotion in the exact moment of its epiphany or disappearance, is for the artist the radical impetus of her aesthetic vantage point and not merely a curiosity or a documentary denominator.
Beyond the image is also a construction of aesthetic elements that refuse their fixed place in the hierarchy of art and demand to move freely, across the optic threshold.
The overarching violence of a blurred city, almost pulverized but yet half standing, provides the setting for this search, charged and emotional, but the process itself is more restrained; images are concealing one another, they must be cleared in order to reveal their truth.

Rima Maroun was born in Lebanon in 1983. In 2006 she graduated from the Holy Spirit University of Kaslik with an MA in photography and on the same year co-founded the ''Collectif Kahraba’’, a group of artists turning to visual and performing arts as a means of expression.
Her work has been exhibited throughout Europe and the Middle East including Italy, Hungary, Syria, France, Greece, Croatia, Bulgaria, Cyprus, Montenegro and Lebanon. In 2009 her work took part in the second edition of the Photoquai Biennale in Paris.
Prior to that, she received the Anna Lindh Foundation Mediterranean award for dialogue through art and culture in 2008.
In 2010, she worked on developing collaborative projects between Lebanese photographers and is actively involved with dance.
Maroun was in charge of organizing the 2010 European Union photography competition in Lebanon on Climate Change and the Environment. In 2011 the artist was selected forMeeting Point 6, an interdisciplinary contemporary art event organized every two years around historical cities of the Middle East and Europe, under the artistic direction of Mr. Okwui Enwezor.
During 2012 Rima Maroun was an artist in residence at the Paris International City of Arts and presented different photography projects in the context of the 2012 Montpellier Dance Festival in France.
In 2013, she comissioned and took part in the exhibition “Fleeting Grounds” at Galerie Janine Rubeiz with the artists Chaghig Arzoumanian, Elise Haddad and Chafa Ghaddar. In 2014, she was part of a exhibition “Nostalgic Imagery” curated by BaksArt and her work is permanently exhibited at Galerie Janine Rubeiz.